Recently I posed a question to a local Facebook regarding fireworks. There had been a lot of people complaining about pets and the anxiety caused by fireworks, so I asked how many of them would be willing to sign a petition to change the local laws. I knew I’d get a lot of backlash, because afterall, it’s is Facebook, and the internet, and people. But that wasn’t going to deter me from asking….

And in the typical Facebook/internet fashion, the discussion started…. to quickly go down hill. Let’s take a critical look at a very small portion of the replies…

Yes, “fun” is what it’s all about. “Life, liberty, and the pursuit of happiness”, right? And I’m the bad guy for implying otherwise. Glad you’ve got me all figured out. 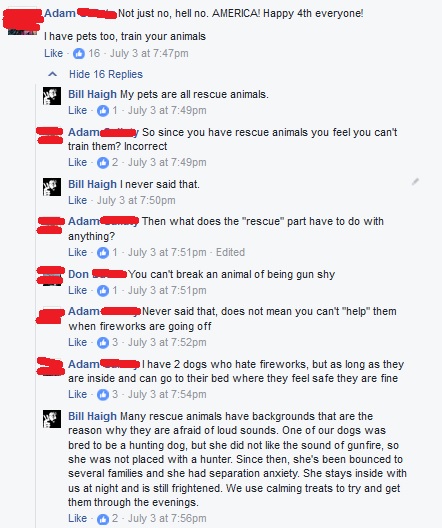 I love how some folks assume we know nothing and we have not already tried to remedy the situation with the animal directly. (/ sarcasm)

I wonder if thee people have ever heard of “change”? People used to smoke in restaurants, people used to own slaves, and people used to worship thousands of imaginary gods. People can (and do) change; yet it seems obvious that some folks think evolution stopped with opposable thumbs. (Maybe it did for them) 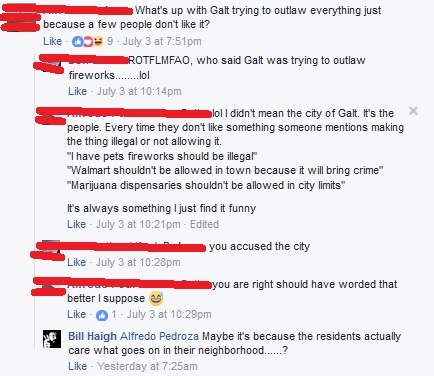 Uh, no; it’s my dog and my fence boards. And the reason she goes through (or under) the fence is fireworks. Let’s stay on point here people. 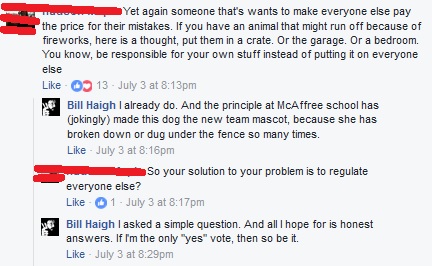 Again someone assuming we haven’t already tried the obvious. Why do people always jump to the wrong conclusion?

Here we go again, false assumptions, false accusations, and narrow minded people. The more I learn about people, the more I like my dogs.

If attempting to beat people up with illogical analogies is your only refutation, then by all means, go for it. A simple “Yes” or “No” response to the original question would have been sufficient, but alas, you felt the need to go full retard.

Because no one likes a patriotic hypocrite. 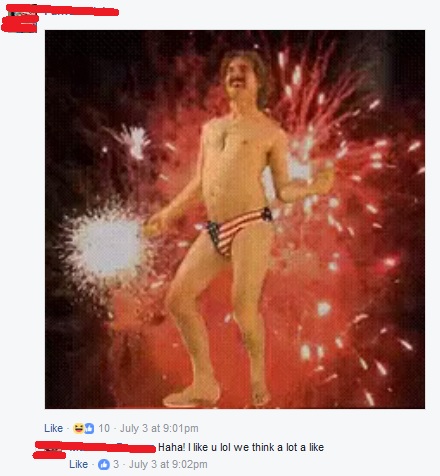 Speaking of “patriotic hypocrites”, let’s review the federal law regarding “desecration of the flag“. Go ahead and read up, we’ll wait here… 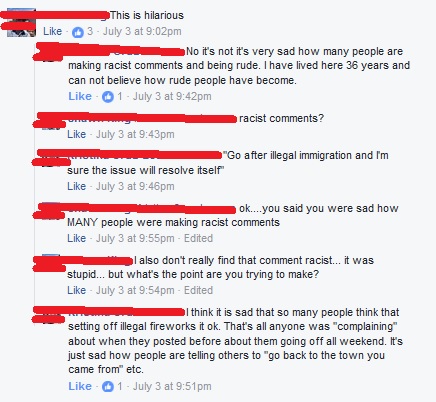 Yes, it is quite sad to see how so many people jump all over someone else, simply because they asked a question. The movie “Idiocracy” was not supposed to be a documentary, yet it is quickly becoming just that. 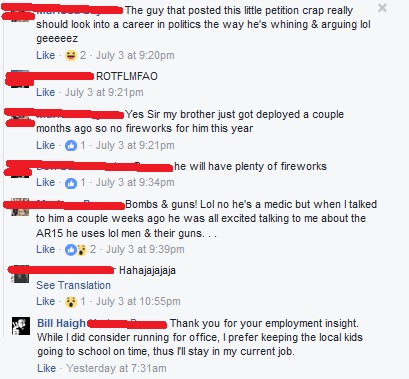 *One question* makes me whiny? Hell, I didn’t even nag about your piss-poor spelling. And I noticed you didn’t say anything after I replied to you. Maybe the cat got your tongue? Or maybe you retreated to your glass house…. 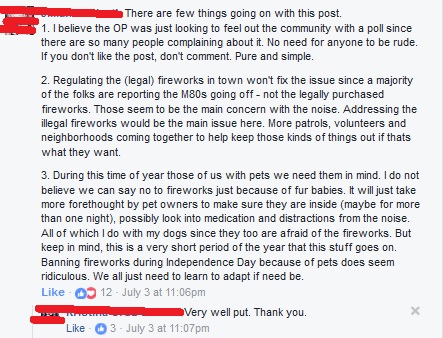 This post actually restores a little bit of faith in my fellow human. Bravo, thank you indeed! 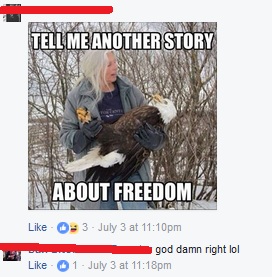 You’re claiming “freedom” while posting a picture of an eagle (a wild animal and national symbol, nonetheless) being physically restrained. Oh the hypocrisy, it should burn you by now. And as far as God goes, I’m willing to bet he doesn’t give a flying fuck about you or your so-called “freed-dumb”.

Now I’m a “liberal hippy”.  Pretty sure someone called me a “snowflake” and a “millennial” too, (though I can’t find those comments now). Note to myself –  I really should update my resume. 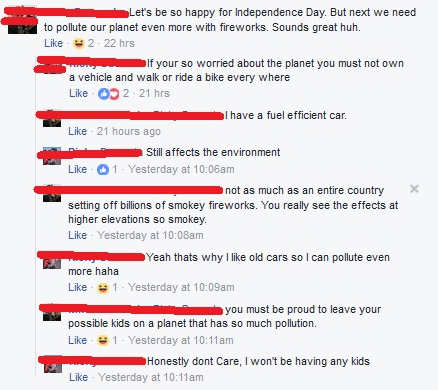 If there is a “silver lining” to any of this, it’s got to be the last comment. Might I suggest a chemical castration just to make sure you don’t change your mind after you grow up? (assuming you ever do) 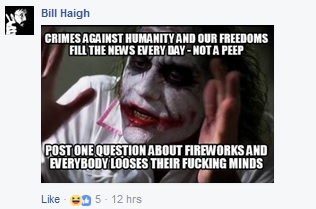 The comments had devolved long past the point of being useful, so I turned them off. Final count was 39 “Yes” votes, 322 “No” votes, and several hundred people who apparently don’t know how to follow directions. Voting on a question is the way democracy is supposed to work and I’ll abide by the group’s decision. (And since the original post was controlled by Facebook, the group’s admin, and myself, it’s also a good example of how an Oligarchy works……  but that’s a discussion for another day.)

The absolute BEST comment (another one that I can’t seem to find now) was “I used to like to blow things up, then I grew up”. This one sentence explains so much.

I’ll leave you with just one last meme to close out this post…..

blah, blah, blarg
View all posts by hemibill →
This entry was posted in Uncategorized. Bookmark the permalink.